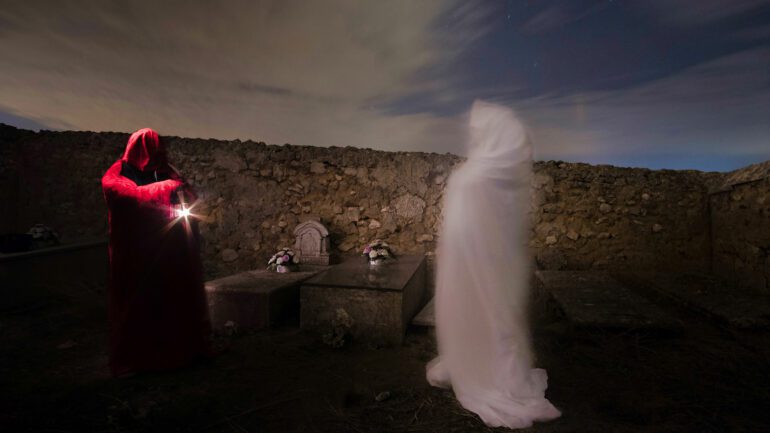 Come to Roswell, GA! Experience the charm and mystery of the deep south through our many ghost stories. Learn much about Roswells deep history from our knowledgeable guides. In the heart of this historic village, one will be surprised by how many spirits reside behind the walls of the antebellum mansions which General Sherman never burned. The deep ravines with their ruined mills hold secrets of exiled mill workers whose toilsome moans may still be heard.

Your experienced guide will lead you on a 2.5 hr hour tour through the historic district of Roswell. One of the highlights of the tour is a visit to Founders Cemetery, the burial site of the founder of Roswell, Roswell King. Here, bodies are buried beneath modern streets and houses. Grand Greek revival mansions and humble mill workers apartments are some of the haunted sites youll see on this mile of easy walking. We are active paranormal investigators who promise to thrill, educate and enlighten with this experience.

I’ve been away from Yelp for a few months (gasp!) and my experience with “Ghosts of New Haven” has inspired me to return. That might be the only good thing that came out of the waste of time that is the New Haven ghost tour. Oh – and the fact that I bought the tickets through Groupon, so it wasn’t as big of a waste of money as it could have been. It was promoted as a tour of haunted locations in New Haven, and their website promised that it would “enchant, entertain, inform, and scare” me. That, combined with the possibility of a dinner in New Haven, sounded like a great night out. We arrived at Starbucks at the appointed time. The tour guide did not greet us, and we only found out she was the tour guide when she started complaining that 4 people still hadn’t arrived. She had no name tag, clipboard, or anything else professional-ish to identify her. Just a gothic-looking prom dress-type outfit, which frankly didn’t stand out much near the Yale campus. Our first stop on the tour was Vanderbilt Hall. The tour guide could not remember the name, until another tour participant pointed out the large sign outside with the name on it. Another point where a clipboard may have come in handy, perhaps? The tour consisted of the group standing outside a building (never went inside any building or the cemetery) while the guide told us ghost stories with very few historical references. (The typical ghost story started with: “There was a guy. We’ll call him Joe.”) Although the guide mentioned that she has been giving tours for over a year, and is also an elementary school teacher, she seemed completely unable to focus and easily distracted. Every passing car seemed to derail her from her poorly memorized presentation. It quickly became apparent that she had no knowledge about the subject matter other than what was included in the presentation. The most ridiculous point in the tour came when we stopped outside of a church, she told us that there were no ghosts there that she was aware of, then proceeded to take from her pocket a picture of the Winchester Mansion, a haunted house in California, which she had ripped from her mother’s copy of Rachael Ray magazine. Apparently she didn’t read the article that was most likely attached to said photo – when a tour participant asked a question about the house, her response was: “I have no idea.” Shortly after that, we nearly abandoned the tour when we walked by a nice-looking pizza place. Unfortunately, we decided to continue – and had the pleasure of experiencing a very awkward moment at the end, when the tour guide asked for tips, and all 12 tour participants walked away, with not so much as a “thank you.”

My wife and I decided at the last minute to take this tour. The group began to congregate outside the Starbucks around 7:15 and our guide Christine came right over to everyone and introduced herself. We started out a few minutes late because of a few stragglers who went to the wrong beginning location. To be fair you can’t blame folks for going to the wrong Starbucks. GPS in the city is spotty because of the buildings blocking signal but we still got off by about 7:45. I have to give high marks to our guide. She seemed very knowledgeable and had an active interest in the city’s history. She was very professional and well spoken. I think the whole group was drawn in by all the tales we heard as we followed Christine around the Yale campus and surrounding historic sites. She timed the whole tour perfectly and we got back to the starting point by about 9:30. The only reason I am giving 4 stars is not even the tours fault. New Haven traffic at night can be loud and occasionally the bus traffic can drown out the guide but with a little adjusting and closing in around your guide it ended up being great. At no point did I feel like our guide would be unwilling to repeat herself if necessary.