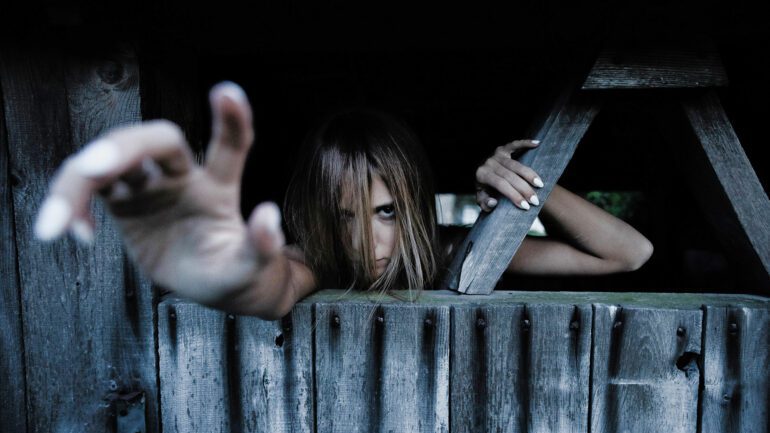 The Demon’s House of Fright

The house sat desolate at the edge of town. The grass in the front yard seemed to stop growing like it gave up trying to give life back to the home. Even the trees were dead. The front porch had seen better days with boards bowing and missing in spots. The front door was a large piece of mahogany, heavy and solid, adorned with an old, rusty door knocker that looked like the devil devouring a ring of life. All of the windows on the ground floor and basement had been boarded up to keep sane people out. Signs were posted everywhere to warn trespassers of the consequences of entering the building. The second floor windows were dark but you could still see remnants of the curtains. No one had lived in this house for over 40 years. There were stories. Stories about witches, devil worshippers, and serial killers. Stories that were supposed to keep people out. Supposed to.

Emmanuel was 14 years old and had heard all the stories. He was at the awkward stage in his adolescence where he was tall and skinny. His attitude was of those who dance to a beat of a different drum since Emmanuel enjoyed doing extreme and sometimes dangerous things. Emmanuel had an idea once to climb the rock cliff at the old quarry which resulted in him having to be rescued when he couldn’t get back down. That’s when Emmanuel was thinking about exploring the “Demon House”, as everyone called it, over the weekend. He had heard all the ridiculous stories and decided to check the place out for himself. He planned to tell his parents that he was going camping with a few friends over the weekend. He would enter the house just before dark and set up an area for himself. Then he would have the entire weekend to explore the house at his leisure.

It was Friday evening when he arrived with his backpack full of supplies and his sleeping bag. He shimmied up the huge dead tree next to the house and climbed in a broken window. As his eyes adjusted to the darkness, he found himself in the bedroom at the top of the staircase. He decided that he would use this room as his base of operations. He laid out his sleeping bag and unpacked his supplies. Flashlights, batteries, a lantern, food, drinks, and his trusty pocket knife. He put the knife in his pocket and grabbed a flashlight. He was excited to check the house out. When he exited the room he concluded to start exploring the floor he was on and made a left. The next room was empty except for the shredded curtains and a child size chair. The closet door had been removed and there was nothing in the closet other than the rod to hang clothes. The wallpaper was hanging in pieces off the wall and Emmanuel thought that this room was boring and moved to the last room at the end of the hall. When he pushed the door open he heard a clank. He shined his light inside to see that there was a bed frame behind the door. He entered the room and moved his flashlight from one side of the room to the other. He saw a dresser on the other side of the bed and a nightstand by the window. The room felt different than the other rooms he had been in and thought that maybe the stories were real after all. He backed out of the room and closed the door.

He went back to his base and grabbed a soda from his pack. As he opened the soda he thought he heard something downstairs. He grabbed his light and put his hand in his pocket, feeling for his knife. He slowly walked toward the stairs. When he shined the light down to the first floor he didn’t see anything… or anyone. He started to get anxious but pushed his thoughts away as he descended the stairs. Once at the foot of the staircase he looked into what used to be a living room and only saw covered furniture. He took a step away from the stairs and shined his light into another room full of boxes and stacks of books but nothing moved. There was no one in either of the front rooms so Emmanuel turned and started down the hallway. He came to a half open door that led down into the dark and musty basement. Emmanuel sighed and rolled his eyes as he focused his light down into the darkness. He saw the stairs and, at the bottom, a dirt floor. He couldn’t see anything else so he shut the door and latched it. He continued down the hall to an open dining area. The table was still there but there we no chairs. The table was dirty with cigarette butts, spray paint, and empty beer bottles and cans. He turned to enter the kitchen when he heard the latch to the basement door move. He spun around to see the door swing open. His heart was in his throat and beating just about out of his chest at the same time. He held the beam of the light at the door as he frantically searched for his pocket knife. When he finally got his fingers wrapped around it he fumbled to open it and dropped it. He looked down to see where it had landed and forgot about the door for a brief moment. That was when the fingers appeared slowly grasping the door. After he picked up the knife, he returned his gaze to the door that now had a hideous face peering out from behind it. The eyes were large and sunken into the face and the nose was small, almost nonexistent. It was tall and had long pointy fingernails. It’s skin was so white that it appeared to be transparent. It moved awkwardly slow toward Emmanuel. He stood frozen in fear, tried to scream but nothing came out. Before he knew what was happening the creature opened its cloak of rags and devoured Emmanuel in one fluid motion.

It was Monday morning and Emmanuel’s parents called the police to report their son missing. Emmanuel’s mother had called some of his friend’s parents Saturday morning to find out where they would be camping. To her dismay she discovered that Emmanuel had lied about where he was going and with whom he would be going with. Emmanuel’s parents went to all the places they thought he would have been but no one had seen him since Friday afternoon. No one knew where he was or where he could possibly be. The police started a search immediately and issued an Amber Alert. After 2 weeks they had no clue of his whereabouts until the “Demon House” was to be demolished. A few of the construction workers found his backpack and sleeping bag in the house. The police searched the entire house but did not find Emmanuel. The only other thing they found of Emmanuel was his pocket knife at the top of the basement stairs.

Next
The FRIGHTENING Reveal