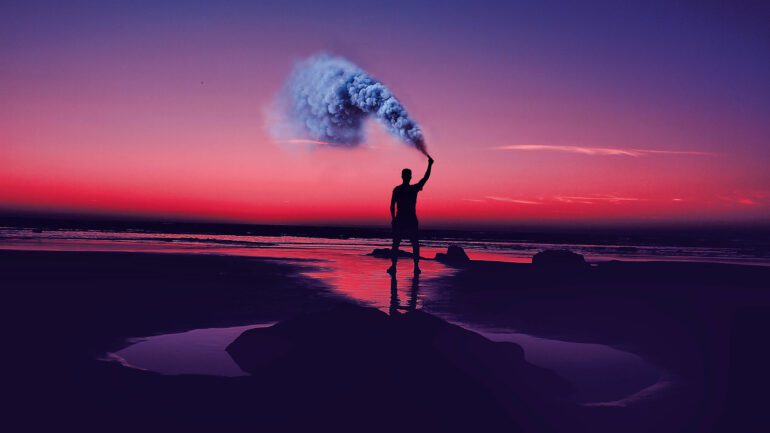 Sherman awoke soaked in sweat, breathing heavily, and feeling extremely terrified. The dream felt strikingly authentic. After concentrating and darting his eyes around the room to acclimate himself, he slowed his heart rate, took a few deep breaths and sat up. He turned on the lamp beside his bed as he lowered his feet to the floor. It had been a short while since the last time he had this recurring dream but this time it felt all too real. All too real. Sherman wiped the sweat off his face as he entered the bathroom. He felt the cold tile beneath his feet which made him feel slightly better, a small relief that he was awake.

He washed his face with cool water thinking about how he would go back to sleep now. Sherman understood the fact that he needed sleep to be healthy and functional for work in the morning, but what if sleeping killed him?

He lumbered back to bed but left the light on, feeling juvenile about his decision. Sherman closed his eyes thinking of anything but the dream. He dozed off after a few moments and began to dream… again.

Sherman found himself inside of his childhood home – the basement to be exact. He took in the surroundings as he headed for the stairs. Everything was as he remembered except the door that appeared on the other side of the basement. Curious he walked toward the door. Approaching the door Sherman could hear something on the other side. He leaned in closer to better hear when someone or something slammed hard against it. Sherman jumped back startled as he saw the door crash with another powerful blow. Not knowing what was on the other side, an unfamiliar feeling, he immediately turned to run for the stairs.

The crashing of the door behind him made him panic even more. He felt heavy and slow no matter how fast he tried to run. No matter how hard he pushed his muscles to help him escape, something was dragging, slowing him down. The door smashed open as Sherman reached the bottom of the stairs. He glanced at the opening when he heard the sounds of agonizing groaning and moaning. All he could see before trying to climb the stairs were pale and bone-y hands and arms reaching out towards him.

Clawing his way to the top of the staircase he frantically fumbled to open the door. Scrambling to get out and shut the door behind him Sherman saw they had made it to the stairs, very close behind. He collided with the door as he closed it. Thinking fast, Sherman grabbed a nearby chair to block the door as it began to bang and crack. Terror filled him as he heard the grotesque noises that were coming from behind the door.

Sherman turned to run only to see he was in the basement again. Confusion washed over him for a brief moment. He should be in the hallway if this was his childhood home, he immediately thought to himself. The noise got louder as the door started to give way. Pieces of the wood flew out with every strike. Sherman started for the stairs again when the door blew out along with the chair. He was out of breath when he hit the bottom of the staircase. When he peeked to see the door something grabbed his ankle. Sherman looked down to see a pale claw grasping him.

Trying to free himself, Sherman fell down the stairs. Clawing his way to get up he felt more hands grabbing at him. He squirmed and tried to fight them off to no avail. There were too many of them and the noise was deafening as it over took him. Sherman was enveloped with a black mass that felt like it was smothering him. He fought for every breath as he tried to scratch and claw his way to freedom. The black mass entrenched Sherman swallowing him whole.

The next day Sherman was discovered by his housekeeper, dead in his bed. Sherman eyes were wide open and the expression on his face was pure terror. His skin was taunt and pale. It appeared Sherman had died in his sleep of a heart attack.

Next
Save Our Cemeteries