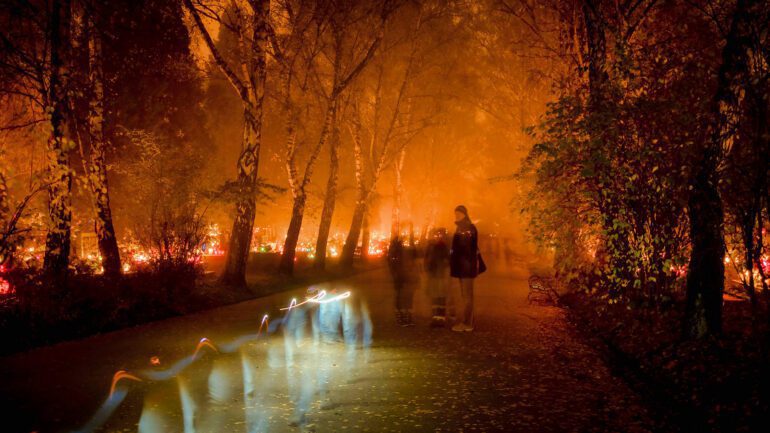 It wasn’t easy living in New York City but Mariela had adjusted to the fast paced city life in no time. The opportunity of a lifetime had presented itself to her 2 years ago on her 33rd birthday. Mariela had found a great apartment with a wonderful view and work was just a few blocks away. She made friends fast but hadn’t met the right guy yet. She was felt like she was in the right place for once in her life.

Upon coming home from work late one evening Mariela stopped to get her mail when she heard a man ask if she could give him a little help. She turned and saw a handsome man standing at the bottom of the staircase with a large box. He said that he couldn’t possibly make it to the 3rd floor without a little help so Mariela grabbed the other side of the box and helped him up to the 3rd floor. She wondered how a man this good looking didn’t have anyone to help him. When they reached the 3rd floor he asked if she’d like a drink for helping him but declined. As he disappeared down the hallway Mariela proceeded up to the 5th floor to her apartment. After getting comfy on the couch, there was a knock at her door. Thinking and hoping it was the guy with the box she had helped earlier she peered through the peephole. She didn’t see anyone so she left the chain lock attached when she opened the door but there was no one in the hall. Shrugging it off she returned to her position on the couch when there was another knock at the door. She hurried to the door and peeked out again but no one was there. Now she thought someone was playing games with her. She waited by the door for over an hour but there were no more knocks. Mariela went to bed and at exactly 2:15 a.m. there was a knock at her door but this time it was her bedroom door. Mariela frozen in fear could hardly breathe when she heard the knock a 2nd time. This time it was louder and heavier but she still didn’t move. She didn’t know if someone had gotten into her apartment or if she was going mad. She tried hard to think of something she could grab to use as a weapon and moved slowly and quietly to her closet. She had her bat from when she played softball in there and opened the door as quickly as possible. She felt around in the dark when another knock came from behind her. She jumped and screamed out. It seemed like the knocking was coming from inside the room this time. Her hand bumped into the bat and with another swipe she grasped it. She swung around, with bat in hand, and flipped on the lamp. There was no one in her room so she called out that she had called the police and that she was armed. There was no answer. Mariela stood shaking with white knuckles gripping the bat for what felt like forever. Her hesitated slip across the floor to the door made her body flush. She gathered herself and flung the door open but no one was there. After searching the rest of the apartment and making herself a cup of tea, she thought she maybe dreaming, having some sort of night terror. As she lumbered back to bed at 4:30 a.m. she finally fell asleep.

The next morning she was late to work and hadn’t had enough sleep due to all the knocking the night before. Mariela suffered through the day and decided to forego the after work bar scene. She stopped off at the corner store for a few things before heading home. Walking into her building she noticed the same handsome man she had seen yesterday carrying another large box. She waited till he got to the stairs to say hello. He turned to her and asked her if she could help him to the 3rd floor. She replied affirmatively and took up the other side of the box. Again when they got to the 3rd floor he asked if she wanted a drink for helping and this time she agreed.

They came to his apartment and he opened the door and with a nod of his head motioned her inside. Mariela stepped inside a dark room. She heard him set down the box and close the door but he didn’t turn on a light. She turned around trying to adjust her eyes to the dark when she saw a figure walking toward her. She tried to stay calm when she asked if he had any lights. Mariela didn’t get a response. Her eyes were still adjusting to the darkness but she could make out a lamp on a table close by her. She felt for the switch and gave it a tug. A bit blinded at first, Mariela turned around to see a room with just a wooden chair, the table with the lamp on it, and no one else. She felt very cold all of a sudden and the lamp dimmed slightly. As she moved toward the apartment door she saw a dark figure move out of the corner of her eye. Her heart was beating so fast and hard she felt light headed as she fumbled with the door knob. Trying to turn the knob with all her strength she felt icy fingers grip her shoulder. The lamp light went out and she was blind again. There was a cold breeze that rushed across her face and it smelled of death. She stood petrified with fear, she hadn’t noticed she had closed her eyes until another rush of frigid air cooled her hot tears that had been rolling down her face. Mariela opened her eyes to see that the handsome man that had brought her here looked more like a rotting corpse now. She screamed again as pain ran down her arms and across her chest. She collapsed onto the floor, dead of fright.

The Demon’s House of Fright

It took about 2 months before they found Mariela’s decomposing corpse. The super had wondered what happened to that nice lady who always smiled kindly at him and paid her rent in time. The apartment she was found in had belonged to a man who was murdered just a few years ago. He was moving some boxes up from storage when he was attacked, presumably to be robbed. It looked as though Mariela had a heart attack after locking herself inside the apartment. No one knows how she got into the apartment or how she locked herself inside with no keys but some believe she was a victim of the ghost that haunts the apartment 3J.