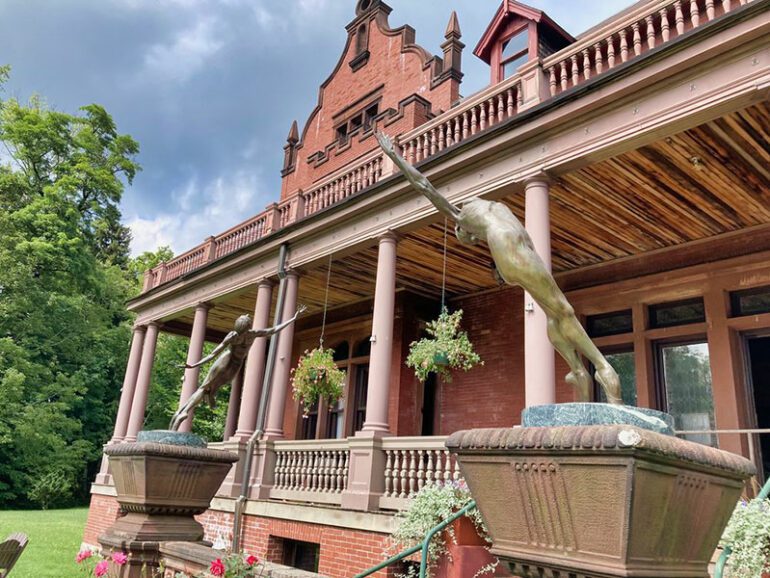 Through tours, lectures, teas, exhibits, theatrical performances and other events, Ventfort Hall interprets the great changes that occurred in American life, industry, and society during the Gilded Age, a fascinating period of American history.

Ventfort Hall, built by George and Sarah Morgan (sister of financier JP Morgan), is an imposing Jacobean Revival mansion. Rotch & Tilden, prominent Boston architects, designed the house, completed in 1893. Described at the time of its completion as “one of the most beautiful places in Lenox,” the house serves as a timeless example of the fine craftsmanship and elegant architecture of the Gilded Age with its hand carved oak great hall, dramatic staircase, beautiful plaster ceilings, expansive lawn, 90 foot grand veranda and more. Ventfort Hall was used as the exterior set for the Academy Award-winning film “The Cider House Rules”. The mansion is listed on the National Register of Historic Places. The Ventfort Hall Association (VHA), was formed in 1994. On June 13, 1997, with the help of many private donations and loans, including a five-year loan from the National Trust for Historic Preservation, VHA purchased the property.

We recently toured this mansion in Lenox Massachusetts. It was a wonderful experience. Tours are from 10 AM till 2 PM so you want to get there about 5 to 10 minutes before the hour to be let in. The guided tour was absolutely amazing and so enlightening about the history of this gilded era mansion. Our guide was Richard and he was very patient with all of our questions and was very keen on sharing the details of each of the rooms. This is one of your larger mansions at 28,000 ft.². Also the grounds are quite amazing around it. It was truly a memorable experience and we will definitely be back there in the future.

Good lord. Just shut down already. This place has been claiming to be in the process of major renovations for years now, but the property and grounds continue to crumble (literally). As a lifelong resident, I decided to check it out on a quiet afternoon. Paid an exorbitant amount of money for a tour of a shell of a building. No original furniture, half empty rooms, walls with large areas of missing paint/wallpaper. I would have loved to see the massive back lawn, but was bluntly told that we weren’t allowed out there because “bricks are falling everywhere”. Charming, eh? The tour guide also made numerous remarks about their lack of funding, which just seemed odd and inappropriate to share with a paying “customer”. They’re also a nightmare for the town to deal with. Everyone from selectmen to building inspectors to local donors have been hopeful that they’d muster up the funds and dedication to turn this place around, but it’s not looking too bright.

Next
The Old Inn On the Green