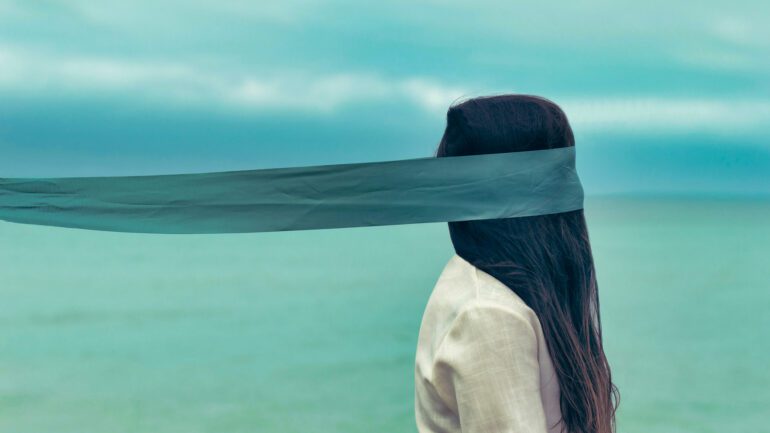 The Woman on the Pier

The drive to the lake house was long, but always worth it. The fresh country air, the beautiful scenery, and long, winding roads provided a much needed revitalization for Alexandra. She had planned this trip to the lake house months in advance, even packing for the trip 2 weeks ahead of time.

When she arrived at her destination it was just getting dark so she decided to explore the area the next morning. The house sat next the lake with a long pier jutting out from a small beach. Alexandra found the key to the house and entered into the foyer. The house smelled as if it hadn’t been used in years although it appeared clean, tidy and well-kept. She walked into the kitchen and found it’s decor older but still in good condition. She opened the door to the bedroom and found it to be cozy with a fireplace stocked and ready for use. Happy with her accommodation she unpacked and readied herself for an early evening.

Upon awakening, Alexandra found the house awash with the early sunlight. She dressed and ate before heading outside to take in the fresh, crisp morning. She stepped out onto the deck and took a deep breath in as she closed her eyes. She stretched for a moment as she surveyed the landscape. She saw someone standing out on the pier and decided to introduce herself. She turned to grab her bag before heading down to the beach but when she looked out at the pier again no one was there. She shrugged and thought maybe she was seeing things or the light bouncing off the water was playing tricks on her eyes. Either way, no one was on the pier and Alexandra went walking down the beach. She saw a few houses scattered around the lake although it appeared she was the only person out and about this morning. She’s an extremely early riser.

She found a path into a small patch of woods and wondered where it went. She walked until she came to an open area. It seemed to be a camping site but it was missing the tents and campers. The fire pit was a large area marked by large rocks. She was getting tired and hungry and decided to start back when she thought she saw someone standing just beyond the trees. She called out a neighborly hello but it looked like the person ducked back into the brush. She was about to walk after them but thought that maybe they were a neighbor who wasn’t used to seeing strangers around here considering the houses surrounding the lake were owned by locals. The area wasn’t known for tourists but it seemed times were changing.

Alexandra turned and walked back to the house.

She rested and ate before she took a ride into town. She drove about 8 miles to the general store where she purchased a few items and filled up her tank with gasoline. She asked the old man at the general store if there were any points of interest that she should visit in the area only to be told that it was just a lot of wooded areas, nothing special. He asked Alexandra where she was going and when she told him where she was staying he told her to just go home. She asked what he meant by that and he seemed to shift uneasily a bit before answering the question. He told her that people get lost in the woods or hurt themselves out on the lake. Even though Alexandra explained that she was just here to relax and not disturb anyone the old man was adamant about her just going home.

Alexandra got into her car and drove back to the lakehouse.

She took her groceries into the kitchen. As she was putting things away she looked out and saw someone again out on the pier. She decided to hurry out this time and catch them. She tried not to take her eyes off of the figure as she moved towards the door. Once outside she noticed it was darker than she thought but continued her stride all the while keeping her eyes on the figure. As she descended the beach her foot caught some driftwood partially buried in the sand. She tripped and landed face first into the water. She quickly scrambled to her feet trying to see down the pier. To her disappointment she didn’t see anyone.

Feeling a little uneasy she started to walk out to the end of the pier. Every step she took felt heavier than the last. Her stomach churned and twisted as she started to feel cold. Finally arriving at the end of the pier she looked down into the water. She didn’t see anything, or anyone. When she saw her reflection on the water she choked with fear. Next to her was a woman standing soaking wet from head to toe. Her skin was white with a blue tint, her clothes were tattered and dirty. Her hair was tangled around her face but Alexandra could see her lips were blue. The woman reached out to Alexandra who jerked away only to slip off the pier. She fell into the water and started to panic. Alexandra was clawing at the water as she screamed in terror when she felt a hand grab her ankle firmly, and started to pull her down. She kicked at it but it only tightened its grip.

Alexandra kicked and screamed for help as she was pulled under.

Alexandra’s body was found a few days later when a group of fisherman went out to the lake. The police ruled it an accident but the locals all knew it was the lake that took her life. They all knew about the figure on the pier and how it lured people to their deaths. The elder locals never passed on the knowledge of why this occurred just that no one should ever attempt to make contact with the woman on the pier.

Next
Original Ghosts of Williamsburg