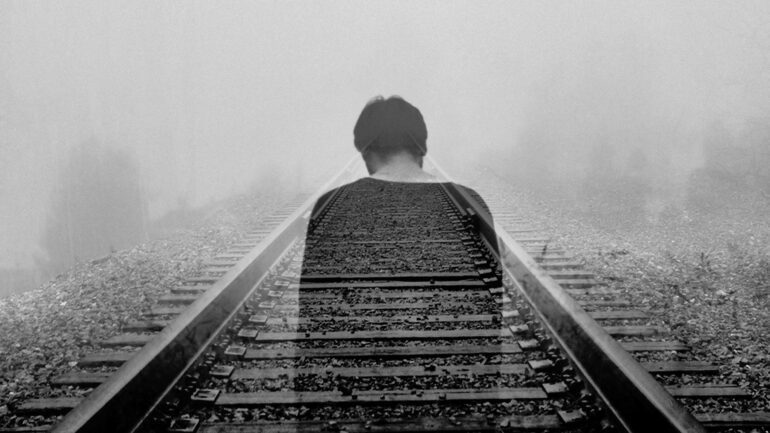 Night Walking in the Fog

It would take two days to drive up to his parent’s home but he had a rational fear of flying and would rather drive than take a train. He had more control that way, he thought. Alfred didn’t mind driving the distance since it afforded him the opportunity to stop off at different restaurants, stores, road stands, and other attractions along the way. He wanted to find a nice gift for his parents since he hadn’t visited them in 5 years. Life had just put too much on his plate to take more trips home. He had some vacation time saved up and decided he finally needed to go home to see his parents.

Alfred left Wednesday evening after packing his car. He placed his cooler on the passenger seat with his cell phone and wallet. He locked up his house and headed out toward the highway. The first part of the journey was uneventful since most of it was highway driving. Rest areas were better than he expected and he slept in his car without incident – to save money, of course. As he turned off the highway onto one of the many rural routes he would have to take, he noticed a detour sign indicating he would need to reroute around a bridge that was undergoing repairs. The area had more than normal rainfall that year and the river had taken out the old bridge – essentially a blessing in disguise.

He continued down the road and came to a fork where he would normally turn right on but the road was blocked off and detour signs pointing the way urged him to turn left. He maneuvered left as the sun started to set. He had driven for about an hour before he came to a dirt road. The blacktop of paved road ended as unfinished, uneven gravel began. Night took over quickly. Alfred started to get tired and his GPS didn’t recognize where he was anymore so he tried to find a place to pull over for the night. There was literally nothing out here but woods, mountains, and wild animals. He couldn’t remember the last time he saw a house or business alongside the road, but continued driving until he found a widened area to park for the night. As he got comfortable he saw headlights coming from the opposite direction. He got out of his car to wave them down but the vehicle never slowed down, passing him by at a full clip! He got back into his car and figured there might be a small town ahead and drove down the road. He drove for about 5 more miles and didn’t see anything.

As Alfred rounded a turn he saw a small clearing that would be good, and presumably safe place, to park the car. So, he pulled off the road. He got out and inspected the now pitch black, barely-lit-by-the-moonlight area. Figuring it was better than being on the road, he stopped by the secluded area and decided to stay there the night. He stretched for a bit and got back into his car. He fell asleep for an hour or so.

Alfred was startled awake by a noise outside. He didn’t recognize the sound, but figured it was probably an animal. He checked the time and decided he was ready to continue his drive. He attempted to start his car, but the engine wouldn’t turn. With a sigh, he stepped out of the car, popped the hood and the trunk. He went to the back of truck and found his flashlight. He pulled the hood up and checked the battery which seemed fine and looked around, realizing he didn’t know anything about cars other than the usual. He closed the hood of the car and grabbed a small white towel from his suitcase.

Alfred left his car locked with the towel hanging from the window so anyone who came upon it would know he had some car trouble and hopefully not tow it away. There was no cell service out here and he was worried he would have to walk for miles to find help. He came to a driveway off to the left side of the dirt road and started walking down the path. It was a long driveway and he didn’t see any property lights on, but continued walking. He was a bit winded when he finally came to a clearing. The driveway lead to a parking area – it seemed. There was nothing here except the gravel and unpaved roadway. After taking a short break, Alfred began to walk back to the dirt road. It seemed different walking back. It appeared to be darker and colder than when he had first arrived. There were no sounds either which was strange. He walked for what seemed like forever and came out to a field, confused and somewhat disoriented. He didn’t remember passing a field of any kind on the way down the driveway nor did he find the dirt road. He looked around to see if maybe made a wrong turn but there was no other path, besides the one he came down from. Alfred decided to turn back the way he had walked. He returned to the parking area and was perplexed by his loss of direction. He sat for a bit and thought about the events that lead him to the place. He retraced his movements in his head as something stalked him from the darkness of the woods. Before he realized what was happening a fog had rolled in which made it almost impossible to see anything. Alfred decided to backtrack and see if he could find his way back to the car.

He started to walk when he heard something move nearby. He tried to see through the fog as he prayed the car was nearby. He couldn’t see any movement in the fog and chalked it up to animals. He began to feel sick when the driveway brought him to a cliff high above a river. Alfred knew he wasn’t where he should be and he kept coming out to a different area every time. He didn’t know what to do next. He tried to stay calm as thoughts of being lost in this place gathered in his mind. He felt the cold night air and wrapped his jacket around himself thinking about how best to handle the situation. He turned back and walked as the fog thickened around him.

The next day a State Police officer found Alfred’s car. He called it in and decided that the man might be lost in the area. Many people who ventured out into this area at night usually got lost and where either found dead or just disappeared completely. A search party was formed to find Alfred but after 3 weeks they declared him missing and possibly dead.