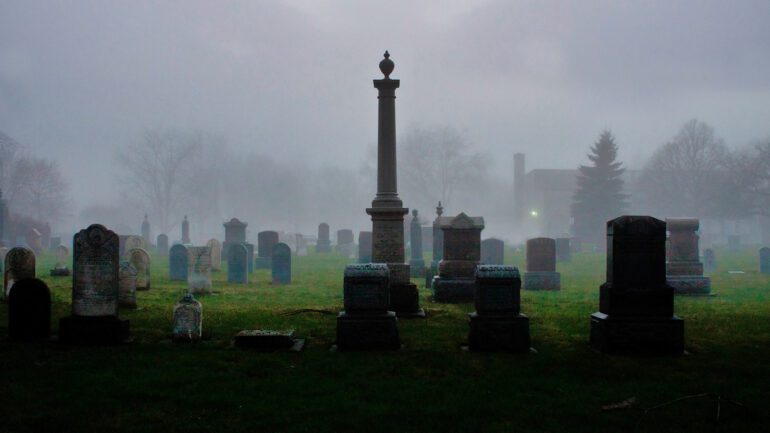 Rene sauntered into the cemetery just before 5 o’clock on a Thursday night. He had meant to stop by sooner to pay his respects to his grandparents but life had kept him too busy. He remembered that the family mausoleum was on the far side of the cemetery so he wandered the isles of headstones stopping to admire and say hello to a few that had been friends of the family. Rene reached the tomb as it was starting to get dark. The door was heavy and creaked out an audible groan when pushed open.

The pitch-black darkness wasn’t inviting but he had brought some flowers and his grandfather’s favorite coin. Rene’s grandfather was a coin collector and had given this to him when he had graduated from high school. He felt obligated to give it back and leave it with it really belonged. It was the gesture that counted in this situation.

He felt guilty for not visiting or even making it to the funeral. His grandmother had passed away 4 years ago with his grandfather following her just a few shorts months later. Rene wondered if there was any light inside or if he had to walk back to the car for a flashlight when he heard a voice behind him. He turned to see the groundskeeper picking up trash as he walked through the cemetery. The groundskeeper told him to use his flashlight that was sitting on the other side of a bench near the entrance of the crypt. Rene thanked the man and grabbed the flashlight.

He switched it on as he entered the tomb.

Once inside Rene found it to be cold and musty with cobwebs weaving around the room. He found their final resting places beside one another and read their name plates. His grandfather had a quote from Carl Sandburg saying “Time is the coin of your life. It is the only coin you have, and only you can determine how it will be spent. Be careful lest you let other people spend it for you.” It was fitting for his grandfather’s marker.

His grandmother had an angel with wings spread wide and arms awaiting. Rene thought about all her trinkets she collected of angels. He wondered what had happened to all of them at that moment, saddening his mood. He placed the flowers in the container between their markers and removed the coin from his pocket. He flipped it over in his hands and gave a smile before placing it beneath his grandfather’s marker.

As he looked at the other markers he heard the door to the crypt groan again. Thinking it was the groundskeeper looking to get his flashlight returned to him, he decided it was time to go. Turning toward the entrance Rene heard something clang against the stone floor. He paused and scanned the space with the flashlight but saw nothing out of place. Shrugging off the noise he started for the door again. Before he reached the ramp he heard the clang again. This time Rene quickly swung around shining the light everywhere and anywhere. Still he saw nothing. He walked back to the other side where resting places for his ancestors he didn’t know where also entombed.

The doorway was short and narrow, and it was obvious that this was the original crypt the new one was built around. He ducked into the room where he found a dirt floor and a sick smell wavering in the air. The flashlight shone on ancestral coffins recessed into the stonewall. Rene felt uncomfortable instantly. The flashlight began to flicker. He shook it and tapped it against his hand a few times. He decided he had seen enough and spun around to stoop back through the doorway. Something, a strong force, gripped Rene’s shoulder painfully tight and yanked him backwards. As he landed on the ground, the flashlight bounced out of his hand rolling against the stone wall and flickered out. Frozen with fear, Rene felt hands grip him again – only this time it was his ankle. He felt it lurching him forward, pulling him into the darkness. Rene tried to scream but nothing came out of his mouth. He clawed at the dirt floor trying to stop from being pulled away. Rene disappeared into the darkness of his ancestral mausoleum kicking and screaming.

Never to be seen again.

After a week, the groundskeeper had Rene’s car towed. He went back to the mausoleum where he had lent a man his flashlight. The groundskeeper found the door shut and searched the crypt only to find his trusty flashlight and nothing else.

He could not explain the footprints and the irregular marks on the dirt ground, as if a struggle had taken place.