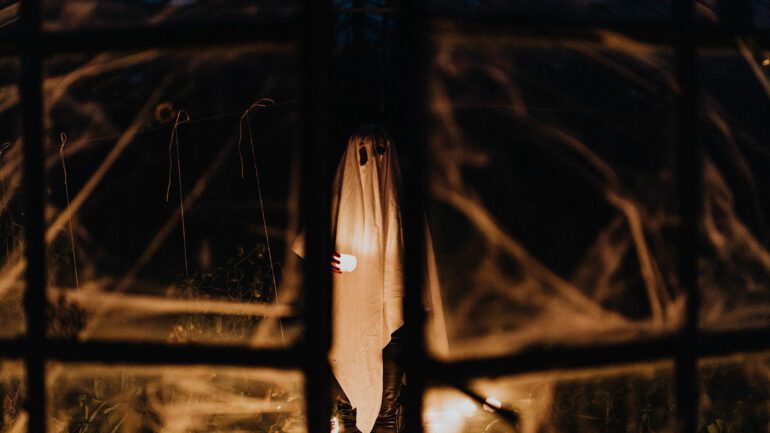 Explore the supernatural among the ghosts and legends of Minneapolis’ original and only real ghost tour.

Maybe it’s the location on the shores of the fabled Mississippi or our long winter nights by a flickering fire. Perhaps it is the history of native tribes whose Spirit Island once rose from the river and has now disappeared forever. Or the legacy of fortune seekers who flocked to the area in the 1800s, some of whom found the wealth they sought and many of whom died trying.

Talking about restaurants I can do, but really getting to see a different side of the city – yes please! A couple friends and I decided this was something worth checking out. We started at Mac Industrial (happy hour till 7pm) then walked over to the event that started at 7. Get there a little before 7 so you can sign the waiver and get all settled in. (We were worried about getting our equipment but they have it available for everyone). The first 20 mins is a slide show introducing you into the world of what they do (ghost hunting) and the equipment. Then we did a tour of the building and learned the history (the tour guy was very entertaining so it was worth the information – just a little too long really). Once we were able to really go and hunt… the first room we went into wasn’t that interesting but it was a great first starting point. Then we went into the basement – which is where it got fun!! We had activity in the hallway with the dowsing rods (I suggest it!) Third place we went was downstairs in the basement. This is the coolest of all. This is where we used the other equipment and had a chance to communicate with other ghosts (and for you guys who don’t believe – don’t judge me… I am a team player and got WAY into it!) Was it worth the visit – absolutely! I would do it again! If I would do it again I would go around 9pm because there is a chance that they might stay downstairs longer (and there isn’t another tour after that.) Happy hunting!! 🙂

My husband and I went on this tour last night and honestly I was disappointed to the point of being livid. We moved here from Seattle, and much like the awesome underground tour in downtown Seattle, I was expecting some historical background and an organized, leisurely-paced walk through some amazing spots. However, this was quite the opposite. First of all, it was $25 a person for a 90-minute tour (the Seattle tour is $10 and you see over six blocks of tunnels) and the first 30 minutes were spent on a historical introduction. This consisted of a poorly-created slide show on a flat screen, while 80s music literally BLARED from the Aster Café next door where there was a wedding reception taking place. Rather than having one investigator and one historian, we were stuck with two “paranormal investigators.” One of them was a medium, and I actually found her to be more credible and professional than the lead tour guide. There was a lot joking around, time wasting efforts to make sure everyone’s paranormal “kits” were complete (a little surprised that for $25/person they couldn’t check the freaking bags prior to the tour to ensure that all the equipment was present with charged batteries), and a fairly lengthy “potty break.” We had used the restrooms prior to the tour, like normal functioning adults, but yet we had to wait 15 minutes for less considerate people to do their business. Then we went down to a basement hallway, where the lights were glaring, and proceeded to spend approx. 20 minutes sweating profusely and watching impatiently as our distracted guide tried to get her recording device to work, and couldn’t seem to stay focused on one task at a time. Two flashlights were set up but no efforts were made to see if they could be turned on in response to questions, and then when a group of people had their K2 meters go off, our guide suddenly developed some semblance of focus and quickly decided this was a child named Tommy trying to communicate. I began to notice that the lights would light up on the meters when our guide would get closer to the group with her massive recording device, and then they would go off when she walked away. I am still amazed I am the only one that noticed this, since earlier when we were checking the functionality of equipment, the guides said we could test it by holding it up to cell phones and other devices to get it to light up. After hanging out in the stifling hallway evidently talking to “Tommy”, we went into two other dark spaces and conducted EVP sessions and flashlight experiments. Maybe if we could have sat still for more than 5 minutes, or ceased one group’s toilet jokes long enough to obtain some modicum of silence, I would have been more impressed. Instead we were being rushed through each space in order to make up for time wasted earlier, obviously sacrificing our experience in order to accommodate the second tour that night. By the time we even made it to the second space we had already burned up 1 hour of time just screwing around. The final space in the mattress factory was cool, but when the guide conducted an EVP session in the women’s bathroom, she simply turned on the recording device for exactly one minute, during which the woman next to me rummaged through her purse noisily and then literally shined a flashlight in my face. I am not a skeptic, and I grew up with a father who is very sensitive to the spirit realm, so I was taught to be patient and respectful, and most of all, QUIET. The only thing worthwhile during the entire evening was discovering the Ghost Radar app, which may be a total hoax but is fun to play around with. Oh, and that was FREE. So if you want to spend $25 to see two basement hallways and one abandoned event space while accommodating the incompetence and disrespect of other group members, then this is perfect for you. If not, I would recommend a historical tour of the James J. Hill house instead. It’s only $8, the guides actually know what they’re talking about, and I recently caught an image that has been deemed paranormal by over three different local paranormal experts. (I have no idea if it is, but it is a pretty cool and unintentional picture of what looks like a butler’s glove). Like I said, the medium in the group was wonderful and seemed to know her stuff. Maybe if she had led the tour rather than the over-caffeinated, disorganized woman we had, and they reduced the price to correlate fairly with the level of entertainment provided, I would have been more excited. With approx. 20 people to a group, you’re essentially paying the rent for the space and not much else. If you are truly interested in a professional and legitimate paranormal experience, I would NOT recommend this tour. Download the app Ghost Radar and go do your own ghost hunt!! P.S. The parking was $5 so all in all we spent $55 to walk thru a basement with dowsing rods. Maybe the other reviewers here have the right idea by going to a bar first.